A large part of the BDS project is built around ensuring that wherever you go in life, and whatever you do, the Arab-Israeli conflict is in your face.

If you walk through a busy square in Cambridge or Boston or San Francisco at rush hour, at some point you’re sure to see a group of wrinkly Israel haters passing out photos of broken Palestinian children which (via a syllogism known only to the BDSers) means you should stop buying hummus made in Massachusetts or New Jersey.

If you shop at a department store during the holiday season, you stand a chance of seeing some even more deranged “activists” stripping to their underwear and smearing themselves with Ahava skin-cream products in public.

Point of fact, these particular antics are not nearly as ubiquitous as the Facebook pages of the boycotters would have you believe (which is why I continue to suspect that such theatre is largely for the benefit of the BDSers themselves). And if flash mobs at phone stores or catcalls at Israeli ballet performances are meant to sway public opinion, the twenty point jump in support for Israel during the BDS era seems to indicate it is counter-productive to the cause.

But neither reality nor the principles of cause leading to effect will ever budge this lot from their program, and when it comes to finding new innovative ways to annoy the public, this is one area where Israel’s foes never lack creativity (or chutzpah).

Earlier this year, they seem to have hit on a breakthrough: bus and subway ads. Unlike flash mobs, rallies and riots, after all, placing an ad on the side of a bus that shows those aforementioned photos of maimed children (with a tagline laying all blame on you-know-who) just requires writing a couple of checks (no great challenge to a “movement” that seems to have the resources to purchase ships and sail them across the Mediterranean).

The trouble is, the sale of bus ads is not limited to just one set of political opinion holders. And when the boycotters tried this stunt out in Seattle, it first elicited loud protests, and finally a threat to run equally ugly photos of victims of Palestinian terror in a parallel campaign. This led the public transport authorities to decide that, all things being equal, they’d prefer to not be the vehicle to subject the public to endless accusations alongside pictures of charred corpses.

As that battle continues (through the courts, naturally, given BDSers inability to take “No” for an answer), the innovation of the public transport ad inspired others to try out this tactic, albeit with a more subtle campaign; to wit:

Now I say “subtle” in the sense of not being built around images of mayhem and violence. But in terms of ideas and imagination, this ad is about as subtle as a brick being thrown at your head.

How is the public supposed to respond to such an ad? “Oh gosh look! A Palestinian father and his beautiful daughter. And there he is alongside an Israeli dad and his equally precious tyke! And they both have jobs that are similar to mine. How familiar, how sympathetic, I’d better do whatever these kindly faces think I should so I can ‘be on their side’ (and stand against the nasty non-fathers, non-designers, non-social workers who must be on the other side).”

And what are we being asked to do in the name of these happy, peace-loving dads and kids? Why support a partisan political position (end US aid to Israel). Now how did we make that leap?

Well we did it with our old friend pathos, or emotional manipulation in an argument. In this case, the manipulation is not vulgar in a nasty sense (i.e., throwing bloody bodies in people’s faces), but it is vulgar in a more nuanced sense (assuming as it does that everyone who rides busses and subways where such an ad is run must be a fucking idiot).

So forgive me for not being taken in, and guessing that the limited response to this new campaign by Israel supporters means that not many people are even noticing (much less taking action based on) this latest tactic in the BDS arsenal. But given how desperately the BDSers want a reaction to their efforts, I am ready to offer a humble contribution to their next set of ads (even if I risk being accused of being less than sensitive to loving fathers and their precious offspring): 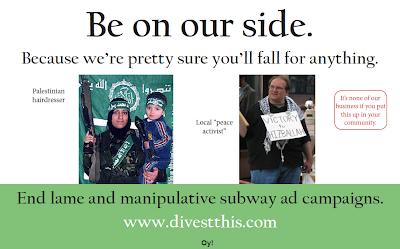 Here’s a PDF, so help yourself.

I tend to see a difference between the controversies that arise whenever a major event (such as the recent Gaza or Lebanon Wars) break out in the Middle East, and ones that are more typically triggered by a BDS initiative, such as a campus divestment or retail boycott conflict.

While both types of protests usually involve the same people and slogans, in the case of reaction to a Gaza War (for example), protestors against Israel are taking to the streets in reaction to an actual controversial event. And while those who rally to support Israel might disagree with their opponent’s characterization of the situation (for example, highlighting Hamas rocket attacks that Israel’s critics ignore), both sides are engaged in real politics about genuine, impossible-to-ignore crises.

But when a divestment battle breaks out on a university, for example, it is always the result of a BDS group first deciding to drag the Middle East conflict onto campus, then finding the pretext to do so in a school’s endowment or retirement portfolio.

As I’ve pointed out over and over again on this blog and elsewhere, the goal of BDS is to get their message that Israel is an Apartheid state, alone in the world at deserving economic punishment, to come out of the mouth of a well-known and respected organization. And, if they can’t accomplish that by actually convincing a college or other institution to divest (which they never have), at least they can brag that hostile accusations against the Jewish state are now part of the fabric of campus life.

Under this formulation, almost anything can be used as a hook to hang a controversy that will immediately divide an institution into armed camps, a dynamic that only serves to heighten tensions still further and make the Arab-Israeli conflict the Alpha and Omega of political/human-rights debate within a community.

Now BDS advocates will claim that a school’s ownership of this share of Caterpillar or that share of Motorola means they are currently “taking sides” in the conflict, and thus BDS is a proper response to an institution that is already making a political statement by holding such equities in their portfolios. But couldn’t that same argument be made to turn any investing organization of any size into a warzone?

After all, for every dollar these institutions invest in companies that in some way benefit the Jewish state, they invariably invest ten, twenty or even a hundred dollars in energy stocks such as Exxon that (by BDS logic) could be construed as a school or other organization “investing” in the Arab side of the Arab-Israeli conflict.

So why are protests not breaking out on campus to get schools to “divest from Saudi/Arab/Islamic Apartheid,” with posters littering the campus of Islamic slave traders in Sudan buying and selling black Africans, women being stoned to death in Iran or homosexuals being hung in Egypt? Simply because those of us who stand against BDS refuse to ruin the communities to which we belong just so we can score points against our political foes.

It’s the same reason we are not hounding artists to cancel tours to countries hostile to Israel, or placing photos of broken bodies on the sides of public busses, or inviting partisan speakers to present on the perfidy of Israel’s political foes to elementary school classes. For even the most aggressive campaigners on our side, this kind of invasion of public spaces is impossible to sustain for the simple reasons that: (1) we are not ready to make the lives of our neighbors miserable for our own political gain and (2) ultimately, our goal is for Israel to live in peace with its neighbors (which means we don’t want to spend morning, noon and night portraying those neighbors as demons).

BDS advocates take a completely opposite position. For them, setting members of a once-friendly community at each other’s throats is a small price to pay for their own political aggrandizement. And as for “peace” being their end goal, their behavior highlights the fact that just as organizations whose names included “The People” usually involves the smallest number of them, organizations that proclaim themselves “peace groups” while endlessly demonizing their political opponents look suspiciously like the propaganda arm of a war effort.