Well it took some doing, but my faithful team of dumpster divers managed to unearth an early draft of Jewish Voice for Peace’s most-remarkable Hagaddah.

It’s clearly a markup version, but it provides keen insight into the true soul of BDS. 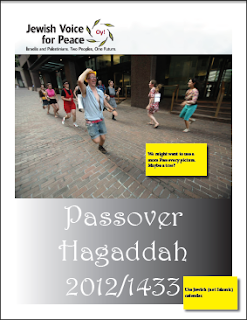 One of the few good things about the Web savviness of Israel’s opponents is that you sometimes get to see all of the hypocrisy and clownishness of the BDS “movement” by simply visiting a single Web site.  And nowhere is this efficiency more on display than at the site of my West Coast friends’ favorite organization: Jewish Voice for Peace (JVP).

JVP has been a subject on this site more than any other BDS organization, perhaps because they tend to show up whenever the letters B, D and S appear at any time and in any combination in order to throw in their “As Jews, we approve!” boilerplate, while simultaneously denouncing accusations of anti-Semitism (whether or not they are ever made) and wrapping their message in a kaffiyeh (which they claim to be a prayer shawl).

But in all the years I’ve been visiting JVP-land, I don’t think I’ve ever seen them put all of their pathologies online as much as they have in the last few weeks.

First up, you’ve got to wonder “what were they thinking?” when you watch them celebrate their own success in getting someone censored (in this case, a group of visiting Israeli gay activists) smack in the middle of a list of other stories decrying their own alleged victimization from censorship.

This form of doublethink first came to my attention when I ran across the JVP site Muzzlewatch a few years back, a site supposedly dedicated to shining light on attempts to stifle free speech (JVP’s) in discussion of the Middle East conflict.  During a six month period of challenging their accusations in a freewheeling comments section, it became clear that for Muzzlewatch’s creators, “free speech” meant their own freedom to do and say anything they wanted without being criticized while “muzzling” meant other people using their own free speech rights to say something JVP didn’t like.

Back then, the Muzzlewatchers attempted to justify their own textbook censorship (in that case, of participating in a lawsuit designed to get the media to shut up about a local controversial issue), by artlessly trying to convince readers that their act of attempted censorship was designed to encourage (rather than discourage) discussion (huh?). You can see this same convoluted logic on display in their current characterization of visiting gay Israelis as not actually interested in “open dialog” (defined by JVP of course), thus making it reasonable to shut them up and down.

If you combine this with JVP’s support for like-minded allies who have started shouting and heckling Israeli speakers from the stage, you’ll quickly discover what I learned years ago: that JVP is simply a partisan organization dedicated to its own side’s victory and its opponent’s defeat.  And in this struggle to achieve their ends, all means are allowed, including bastardizing the language of free speech and open dialog (just like they turn words like “peace” and “justice” into weapons of war), knowing full well that it is their opponents who actually possess these virtues that JVP only feigns.

This contradictory behavior plays out particularly clearly when you look at the challenges JVP (and similar organizations) face in trying to portray themselves as open (and even starved) for dialog, while simultaneously doing everything in their power to ensure “dialog” only consists of them saying what they want (from any forum they demand) without challenge.

For example, a few months back JVP’s “Youth Wing” rolled out their Go and Learn campaign and proudly announced they would welcome any and all (including critics) who wanted to talk about their beloved BDS project.  Now as one of those opponents they claim to crave debate with, I swiftly provided them an invitation to begin this dialog immediately.  And to my surprise, they published my comment on their site (although the ability to submit further comments somehow disappeared in the process).

Well here we are months later and despite follow-up e-mails I’ve sent the group, all that’s happened is that my original comment has been disappeared from their site, continuing JVP’s unbroken track record of greedily controlling their own public spaces at all cost while simultaneously shrieking to Gaia whenever anyone else refuses to hand their platforms (and money) over to them.

Later this year, I’m hoping to focus on some of the rhetorical and argumentation techniques necessary to present this type of unquestionable hypocrisy as moral virtue.  But before we get there, it needs to be pointed out that the first victims of the flimflam JVP and other BDSers spend so much time selling are the boycotters themselves.

It would be easy to dismiss their behavior as simply cynical and manipulative.  But no amount of cynicism could possibly explain this latest release on the JVP hit parade: their own version of the Passover Hagaddah, complete with “The Israelis are the new Egyptian Pharos!” words and imagery, delivered with the same subtlety as having a cinder block dropped on your head.

One is first tempted to simply stare dumbfounded at the combination of historic ignorance and cultural contempt required to cast the Jews as the villains in their own foundation story.  Even in an era when Passover readings and rituals have been leveraged for every imaginable political purpose (featuring Hagaddah’s written specifically for those of the woman’s rights, civil rights, Zionist and transgender perspectives), JVP’s foray into this long-abused genre sets a new precedent for utter tastelessness and self indulgence.  It is truly a work that could only have been contemplated (much less executed) by those whose universe consists of nothing but themselves.

But fear not readers.  For even a bit of sober psychologizing has not prevented me from sicing the Divest This dumpster-diving crew on the task of unearthing material that might help us better grasp JVP’s latest groundbreaking work.