While I’ve always tried to link to individuals and groups whose efforts have inspired this or that piece on Divest This, my New Year’s resolution is to highlight the important work of organizations who may have gone unsung on this site, the first being The Israel Project an informational clearinghouse for detailed and accurate information about Israel and the Middle East.

I’ve been a subscriber to their Daily TIP mailing for quite some time, and it was a recent piece they sent out regarding the latest tactic of Abbas and Co to join the International Criminal Court (ICC) in order to subvert it for their own purposes that provided the title – and subject – for this piece.

The Israel Project’s mailing spelled out (and footnoted) the facts and history behind previous Palestinian infiltration, cooptation and coercion efforts designed to turn an international organization created to fight for a worthy cause (the preservation of cultural heritage – UNESCO, the furtherance of human rights – UNHCR, and now international law – the ICC) into weapon systems directed at you-know-who.

Like similar efforts at infiltration and cooptation we see taking place within civil society organizations by the BDS “movement,” the PA’s attempt to join global treaty organizations in order to subvert them reflect a repeating pattern of leveraging the openness and liberality of the many for narrow and illiberal ends of the few.

Just as Jewish Voice for Peace (JVP) demands the right to speak from every platform in the land while denying their own platforms to anyone else, anti-Israel propagandists (including Israel’s alleged “peace partners”) are demanding that anyone dedicated to a progressive or humanitarian cause must bow down before them, while all the time refusing to subject themselves to rules or standards implied by phrases such as “human rights,” or “international law.”

And so the next international organization becomes corrupted to the point of uselessness (beyond generating indictments of their new member’s favorite political enemy).  And while it is obvious why someone like Abbas would like to hear his charges come out of the mouth of a respected entity like the International Criminal Court, it’s not entirely clear what the rest of the planet gets out of such a deal.

After all, these organizations (not to mention the causes they fight for like cultural heritage, human rights and international justice) are all human constructs, and fragile ones at that.  Given how recently the nation state became the key organizing principle for human societies, the notion that we must be evolving into a global order where everyone enjoys equal  human rights (just as citizens of a nation are supposed to have equal citizen rights) is just that – a notion.  Or, more specifically, it is a cause that needs to be argued for (especially to those nation states being asked to sacrifice some of their rights for the benefits of participating in such a new – and allegedly beneficent – global order).

But what happens when nations or individuals and organizations acting on behalf of nations take over the organizations meant to undergird such a new order and turn them into tools of national statecraft (or warcraft)?  Under those circumstances, are human rights and international law still beneficent principles we should all be fighting for, or slogans behind which the ruthless hide in order to get others to do their bidding?

A few years back, I recall a visitor to this site claiming that even if the global institutions being built were less than perfect, we should still support them since any problems simply represented growing pains in an evolutionary process that was destined to lead to a better world, just as biological evolution leads to continued improvement of a species.  But even biological evolution is hardly on a pre-destined trajectory towards perfection.  Yes, on the whole it has led to progress.  But it has also led to dead ends, mutations and the termination of species that could have flowered (and even evolved into something superior to luckier survivors) had they not met some random catastrophe that wiped them off the board.

In a similar way, a mutated “evolving” global system in which tyrants get to decide who is a human rights violator (a list that never includes them), one where faux-nations get to indict real ones for imagined crimes is a system no genuine supporter of things like human rights and international justice can embrace.

Which is why anyone dedicated to transforming the world into something other than a planet full of competing nation states – even if such advocates have nothing but loathing for the Jewish one – should be first in line to condemn attempts to corrupt our already corrupted global institutions still further.  For an International Criminal Court that can indict Israel in the name of “Palestine” is the same institution that can indict anyone without the power and ruthlessness to take over and twist it to their own narrow purposes.  And whatever you want to call such a process, calling it “justice” is a sick joke no genuine advocate for justice should find funny. 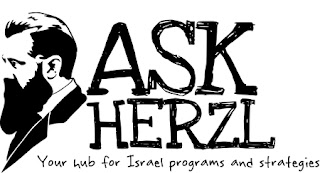 I’ve sometimes been critical of “our side” with regard to leveraging the Internet and Web 2.0 communications to get the word out.

I definitely include myself in that part of “our side” that needs to do a better job communicating the truth as effectively (if not more effectively) than the BDSers spread their lies.  But an excellent new project just kicked off by the Israel on Campus Coalition (or ICC – a group of pro-Israel groups working in schools and on college campuses) demonstrates just how good an Internet-based political resource can be.

Simply put, Ask Herzl – a site dedicated to providing students a central repository for information on campus-based pro-Israel programming – is probably the best activist resource site I’ve ever seen.  Ask Herzl includes descriptions, documentation, time and cost estimates and virtually anything else a campus group might need to implement a pro-Israel program or event (many of which have already been proven out on other campuses).

Given that the site includes references for hundreds of different activities, their search functionality is well implemented, and their use of social media tools to expand the reach of Herzl is well integrated and top drawer (leveraging the latest “hot” social networks like Google + and Pintrest – sites still little understood or used by many of us “old fogeys” who can barely keep our Facebook pages up to date).

I’m proud to say that Divest This material has a home in their sections devoted to BDS, and I’ve been told that this iteration of the site is just the beginning – which I believe given the many access points Herzl provides students to submit their own successful program materials (as well as participate in various grant and scholarship activities).

Some may kvetch that the programming included on the site tends to focus on education and outreach (vs. attack-based programming targeting Israel’s critics), but I believe this is simply a reflection of what students are most comfortable with regarding how they want to interact with “undecideds” on campuses.  And since it’s never been proven that aggressive activities such as “mock walls” or “Israel Apartheid Week” do anything but alienate such undecideds, the focus of Ask Herzl seems to reflect the opinion of most pro-Israel student groups to not get into people’s faces.

Ask Herzl certainly doesn’t solve all of our online partisan problems.  As I’ve noted before, one of the other side’s key strengths has nothing to do with cutting edge high tech, but is simply a result of their willingness to spend time running around the Internet liking and linking everything that supports their BS in order to drive those stories up the search rankings.

But projects like the ICC’s Herzl site is centered on building connections, and in addition to letting students struggling with campus-based Israel hatred know that they are not alone, one hopes that it will foster a community where most if not all of our low and high-tech communication challenges can eventually be solved.

So Bravo to ICC, and if you’ve got any questions: just Ask Herzl!