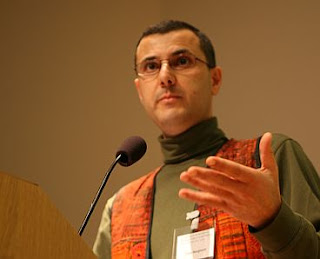 If you’ve been on either side of the BDS debates over the last couple of years, you can’t help stumbling over Omar Barghouti, co-founder of the Palestinian Campaign for the Academic and Cultural Boycott of Israel (PACBI).

I’ve discussed PACBI before, and despite a name which implies that the organization’s focus is on academic and cultural boycotts (the least successful variant of BDS), the PACBI name – and Barghouti’s – tend to get invoked by participants in any BDS project (university and union divestment battles, product boycotts at US food co-ops, etc.) regardless of whether they fall into PACBI’s alleged mandate.

When the Irish trade union movement met to discuss their controversial boycott resolutions against Israel, Barghouti was on the agenda. When the San Francisco Jewish Federation was debating how to prevent BDS activists from subsidizing their project with community money, local Jewish leaders were denounced for not debating Barghouti on the subject.

Even within the Israel-de-legitimization movement, where the efficacy of BDS vs. other tactics are debated (usually behind the scenes), Berghouti’s name is used as a show-stopper, an attempt to end disputes over the subject by claiming PACBI’s 2005 academic boycott call means the BDS movement wells up purely from Palestinian civil society and is thus beyond discussion. (The fact that PACBI and Barghouti himself are late-comers to the BDS campaign, which began in 2001, seems to have fled the consciousness of anti-Israel campaigners.)

So who is Mr. Barghouti?

If the name rings a bell, Omar Barghouti is related to a pair of older Barghouti’s, Mustafa Barghouti (the man who ran against current Palestinian Authority President Mahmoud Abbas) and the more notorious Marwan Barghouti who is currently serving five consecutive life sentences for his involvement in terror attacks against Israeli civilians. Like the Husseini’s, a clan which includes PA negotiator Faisal Husseini, the late Yassir Arafat (whose real name is Abd al-Rahman abd al-Bauf Arafat al-Qud al-Husseini), and the infamous Haj Amin al-Husseini (the George Washington of Palestinian nationalism who spent World War working for the Nazis in the Middle East), the Berghouti’s are major players in regional Arab politics.

Like a number of “professional Palestinians,” Omar Barghouti’s role as stand-in for the suffering local masses is a bit of a stretch. He was born in Qatar, but grew up in Egypt, the land that produced two of the most famous names in “pro-Pal” politics: Yassir Arafat and Edward Said (Arafat’s Egyptian accent was always a bit of an embarrassment for his allies, and Said had to admit to his Egyptian origins towards the end of a life of Palestinian identity politics).

Deeply ensconced in the higher end of the local upper Middle Class, Barghouti lived abroad and attended Columbia University before moving to Ramallah after college and, most recently, enrolling in a graduate program in philosophy at Israel’s Tel Aviv University. It is from this perch within Israeli academia that Barghouti runs his global campaign to have all academics everywhere shun their Israeli colleagues until all Arab demands against Israel are met in full.

The do-as-I-say-not-as-I-do nature of a leader supporting (and supported by) an Israeli university calling for academics (and everyone else) to boycott Israeli universities is a touchy subject within the BDS movement. When asked directly about the contradiction, Barghouti dismisses questions as a personal matter over which he does not wish to comment. When one critic refused to ignore the issue, Barghouti stated that “oppressed people don’t have a choice of where they go to school” (an interesting statement for someone who got into New York’s Columbia University, an honor denied to 90% of the “non-oppressed” people who apply).

When thousands of people signed a petition calling for Barghouti to be kicked out of Tel Aviv university for his tireless attempts to shut down Israeli schools, the humble Barghouti claimed kinship with Mahatma Gandhi, Nelson Mandela and Martin Luther King (all of which attended university within countries they criticized and fought against). And when the head of that university refused to punish him for his political activism, Barghouti became even more enraged, fearing that this act of Isreali academic liberalism would be used to besmirch his campaign to have Israeli acadamia globally condemned and boycotted for its alleged illiberalism.

If all of this makes your head spin, the key to understanding Barghouti is to see him as an academic vs. a political phenomenon. Like many (if not most) of the people who fuel the BDS “movement,” Omar Barghouti does so from within the ultimate safe environment: the womb of the university. There, his middle-class lifestyle is subsidized, his graduate school workload as light or as heavy as he chooses to make it, his position at the university protected by those he condemns, just as his body is protected by the Israeli security forces he claims are homicidal maniacs.

Like the many student activists around the world who look to him for leadership, Barghouti gets to pose as a risk taker knowing full well that his political activity will never be punished. The opposite, in fact, since his role within PACBI has provided him global celebrity status complete with endless speaking opportunities and trips around the world which don’t seem to be getting in the way of his preparation for final exams.

Like students at Berkeley and elsewhere, Barghouti gets to endlessly complain about his movement being silenced, even as jets around the planet delivering his message and penning articles that routinely get published in major newspapers. Like the BDSers who endlessly claim to be showing great courage by standing up to “Jewish power,” he rails against fantasy threats knowing full well that a late night knock on the door by his alleged oppressors will never materialize.

If the global leadership of the BDS movement resides anywhere, it resides at Tel Aviv University where a graduate student who does not seem to engage in any academic activities gets to dwell in highly-subsidized perpetual adolescence, jetting around the planet in luxury condemning the very institutions that support a comfortable lifestyle. In this role he takes no risks while claiming great courage, the ultimate middle class warrior acting as a stand-in for the repressed of the world.

Given all this, is it any wonder that Omar Barghouti is the poseur-child for BDS, leading ranks of the privileged all playing the role of repressed victim at someone else’s expense?

When divestment began to get its hooks into UK labor unions 5-6 years ago, local BDSers crowed that it would only be a matter of time before American labor took up their anti-Israel calls. “Good luck with that,” I recall thinking at the time, remembering my visit to AFL-CIO headquarters back in college where I was greeted in the lobby by a gigantic bronze statue of former Israeli Prime Minister Golda Meir.

Because of their self-image as warriors attacking Israel from the left-end of the political spectrum, the boycott brigade spends much time gnashing its teeth about the support the Jewish state receives from Evangelical Christians. Lost in this posing and positioning is the fact that there is one group even more dedicated to Israel’s success and survival than religious Christians: the US labor movement. The AFL-CIO continues to be the nation’s large holder of Israeli bonds, labor leaders are routinely on the speaker’s list at national and local pro-Israel events, and the missing variable explaining why both the Democratic and Republican parties remain equally supportive of the Jewish state is that both parties have key constituencies (unionized workers for the Democrats, Evangelicals for Republicans) solidly friendly to Israel.

The friendship between US labor and Israel is longstanding, dating back to the years when Israel’s founders (primarily Labor Zionists) created a nation devoted just as much to labor as to Zionist principles. The fact that the US union movement (unlike their equivalents in Europe) never succumbed to the lure of radical politics also immunized them from far-left influence once the Soviet Union decided to become the key sponsor of Israel’s foes in the propaganda wars that heated up in the 1960s and 70s. When US unions have briefly entered the divestment camp, they’ve tended to come from “alternative” professional unions (like the Lawyer’s Guild, a left-wing alternative to the more mainstream American Bar Association).

This brings up an interesting issue, given that divestment activity tends to also be strongest abroad among professional unions (notably academics, such as the British University and College Union or UCU) vs. traditional workers groups. While I’m no class warrior (given that I represent the middlest of the middle class myself), it’s hard not to notice that divestment (and anti-Israel agitation in general) tends to primarily be a bourgeois affair.

In a way this makes sense since radical politics in the 21st century tends to be strongest in middle class institutions (notably expensive universities or East and West Coast “high” Protestant churches). Noam Chomsky (a neighbor of mine in the Massachusetts suburbs), the late Edward Said (whose pro-Palestinian politics always took a back seat to his comfortable New York life), and the rest of the Israel-bashing professorate represent the ultimate example of the “bourgeois jihidi:” highly-paid, highly-comfortable loudmouths whose every utterance is protected behind the blast shield of tenure (a life employment deal that even the most powerful unionized American auto worker would envy).

Having more than a passing familiarity with the stability that the growth of a middle class brings to a society, I am in no way dissing the class into which I was brought up and where I firmly remain. And yet, having lived all my life in a middle class milieu, I also recognize that some of the worst ideas I’ve ever encountered (ranging from simply wrong-, to full-fledged dick-headed) tend to emanate from my fellow suburbanites. Perhaps the comfort we (or, more accurately, our predecessors) achieved gives many of us the free time or lack of perspective to demand others (such as Israelis) take risks that we would never think of putting ourselves (or our families) in. Or perhaps we have forgotten the lessons taught by those who came before us (like our grandparents who started the US labor movement), assuming instead that our current blessed state is something we achieved by our own righteousness, an amnesia that allows a small subset of us to dedicate its considerable free time to politics based on attacking those who would defend themselves, simply to work themselves into the ignorant self-righteous fury that is the alpha and omega of their political self image.

Clearly the labor movement in America, Israel, Europe or anywhere else in the world is startlingly different at the beginning of the 21st century than it was throughout most of the 20th. And yet even when faced with challenges and decline, even when tempted by those who still dangle revolutionary baubles in their faces, American labor continues to be part of the vast majority of Americans whose support for the Jewish state is deeply embedded in both their heads and hearts.

One of my favorite moments during a five-year battle against divestment took place at a meeting in City Hall at Somerville, MA where the aldermen were debating a municipal divestment motion. Along with various other pro- and anti- divestment speakers, the group that stood out consisted of a half-dozen burly pipe-fitters, carpenters and machinists from a local labor federation who expressed in the clearest possible words the monstrosity of the divestment resolution the city was debating. While I didn’t know it at the time, the jig was clearly up the moment the only people in the room who worked with their hands for a living told divestment advocates to stuff their resolution where the sun never shines (except perhaps on those nude beaches where divestment’s academic backers occasionally vacation during six- or twelve-month sabbatical breaks from work).